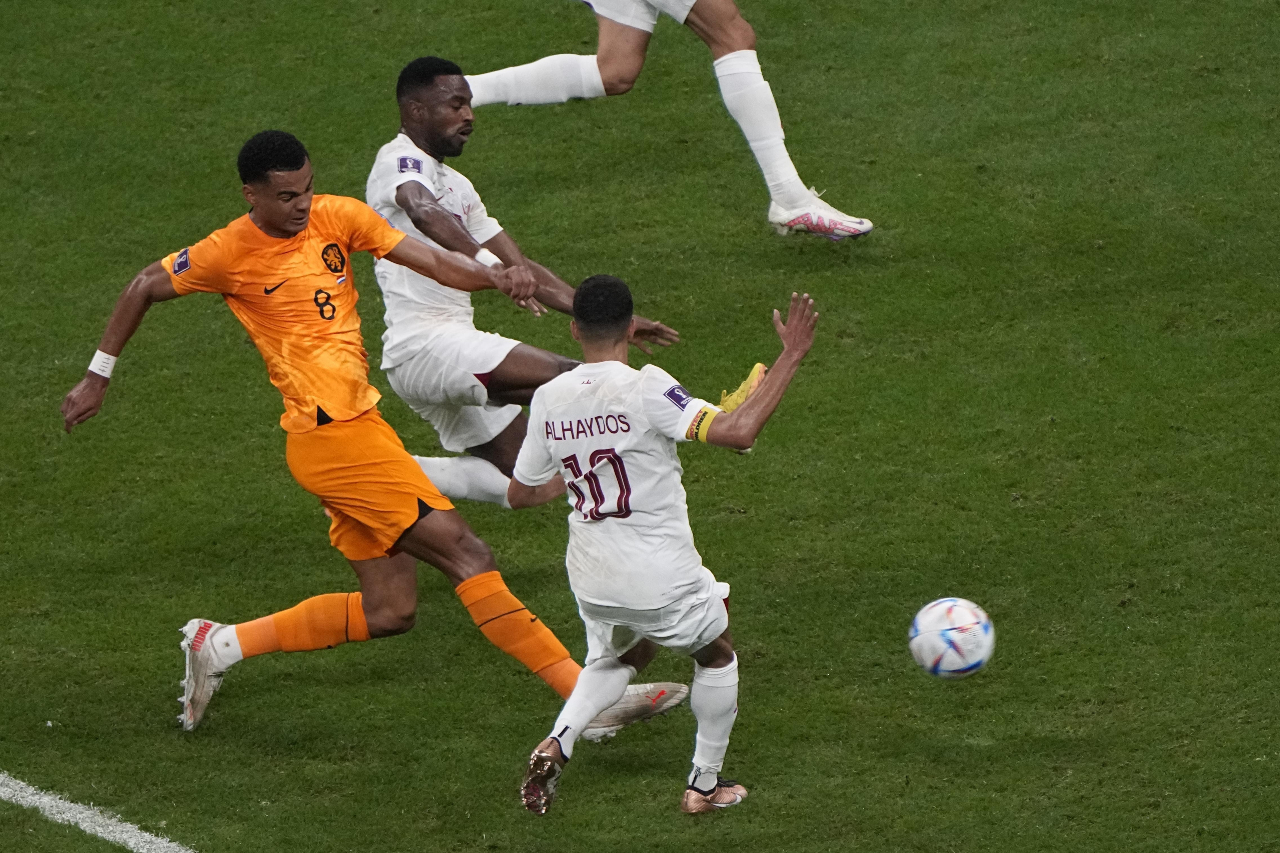 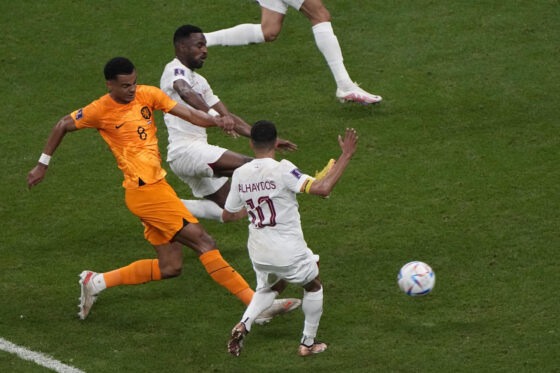 Cody Gakpo was on target for the third match in a row for Oranje. Photo: AP/Ariel Schalit

Cody Gakpo scored his goal in three matches as the Netherlands cruised into the World Cup knock-out stages with a 2-0 win over Qatar.

Frenkie de Jong added a second after half-time as Louis van Gaal’s side were rarely troubled by the host nation, who finished bottom of Group A with three straight defeats.

As expected, Memphis Depay started the match for the first time in the World Cup, with Gakpo playing alongside him and Davy Klaassen in the space behind the front two.

The Dutch struggled to break down a well organised Qatari defence initially, but after 26 minutes Klaassen threaded through a pass for Gakpo to fire past Qatari goalkeeper Mehsaal Barsham.

De Jong tapped in the second five minutes into the second half when Barsham was unable to deal with Depay’s close-range shot, following a good cross from Klaassen.

Substitute Steven Berghuis thought he had added a third shortly after replacing Klaassen in the 65th minute, but the VAR panel spotted a handball by Gakpo in the build-up.

Berghuis came close to adding a gloss on the scoreline in injury time when his curling shot from the edge of the penalty hit the top of the crossbar.

Dutch coach Louis van Gaal said after the game he had seen an improvement in Oranje after their first two ties.

‘We were much more careful in possession and I think we saw two nice goals,’ he said at the post match press conference. ‘In the end we did what we had to do.’

Nevertheless, he said, some players are still not on form, including Memphis Depay. ‘ But if we want to become world champions, Depay has to play,’ Van Gaal said.

As group winners the Dutch will now play the runners-up in Group B, comprising England, Wales, the United States and Iran, in the round of 16.

In the other match in Group A, African champions Senegal beat Ecuador 2-1 to go through as runners-up. The winners of Group B will await them in the last 16.

Thank you for donating to DutchNews.nl

The DutchNews.nl team would like to thank all the generous readers who have made a donation in recent weeks. Your financial support has helped us to expand our coverage of the coronavirus crisis into the evenings and weekends and make sure you are kept up to date with the latest developments.

DutchNews.nl has been free for 14 years, but without the financial backing of our readers, we would not be able to provide you with fair and accurate news and features about all things Dutch. Your contributions make this possible.

If you have not yet made a donation, but would like to, you can do so via Ideal, credit card or Paypal.